The Deep Truth of Human Life 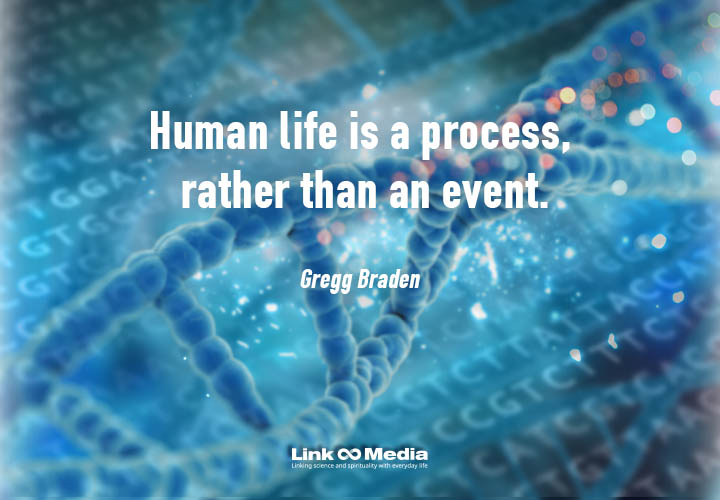 The deep truth is that the beginning of human life is a process, rather than an event. Life begins as life. As I’ll discuss later on, humankind has yet to create living stuff from something that is not already alive. From this understanding of what happens in the womb, it becomes clear that at every stage of development our cells are "alive" in a different way.

The living essence of a father’s sperm and a mother’s egg each holds half of the living material needed to form a new being. When the sperm and egg merge to form "one" of us, the first cell that’s created through their union meets the biological definition of life in general. So we are definitely alive from the first cell of our existence. But the root of the controversy is less about living cells, and more about when we assume the qualities that we consider to be human. And this is where a clear understanding of what happens in the womb, and when it happens, may be useful.

While scientists are working hard to unlock the mystery of what turns on our genetic code, there is no doubt that our DNA activates at the eight-cell stage. During this phase of development (the embryonic gene activation stage), we acquire the characteristics that we have inherited from our parents – the traits that hold the potential for what our lives can become. This is one of those places where a unified way of thinking about our world may give us an understanding that an isolated view from a single field of science cannot. It’s one of those places, as well, where we can only benefit from crossing the traditional boundaries that have kept the sciences separate in the past.

Recent discoveries in the study of quantum physics show beyond any reasonable doubt that we are surrounded by a sea of living energy. This means that we can’t separate life from the energy that surrounds it. They exist together. They interact together. And it’s through this interaction that we experience life as we do. Embracing a holistic way of thinking may be the key to understanding what happens to activate our DNA’s map of life at the EGA stage (about four days after fertilization). Here’s the reason why:

The field we are bathed in - known by names ranging from the Divine Matrix and the Mind of God, to simply the Field - is what fills the "empty space" between things. Modern biology also calls this field part of the "environment" surrounding living things. This is an important concept when we think about where human life begins and what happens in the eight-cell stage. The study of epigenetics has shown that while the code of DNA within our cells definitely tells our bodies how to function, the signal activating the code appears to come from outside of the cell. In other words, it comes from the field itself!

We know this through the process of cell rejection, common after organ transplants. When an organ from one person is placed inside the body of another, the recipient’s body doesn’t recognize the new tissue as being "self". And because it doesn’t, it treats the new tissue as a foreign object by rejecting it. A breakthrough came when scientists discovered how to suppress the rejection mechanism so transplanted organs could grow and thrive in new bodies.

As my dear friend and cell biologist Bruce Lipton skillfully explains, when the inside of a cell (the nucleus containing its DNA) is removed from its original membrane and placed into the membrane of a different cell that has different receptors (antennae) on its surface, different portions of the transplanted DNA are activated. The key point here is that it’s the same DNA in both cells, but the different receptors are picking up different kinds of information from the field that surrounds them. In other words, it’s the same blueprint in either cell, but different antennae are tuned to the field of the environment. Suddenly the whole problem of organ rejection, along with a number of other mysteries, became less mysterious.

The reason why I’m sharing this information here is because it’s only at the eight-cell stage that this gene activation is known to occur. This fact implies that it’s only at this stage - the stage EGA - that our cell receptors "wake up" and acquire the signal from the field that tunes them to produce the characteristics that make us human, and unique. 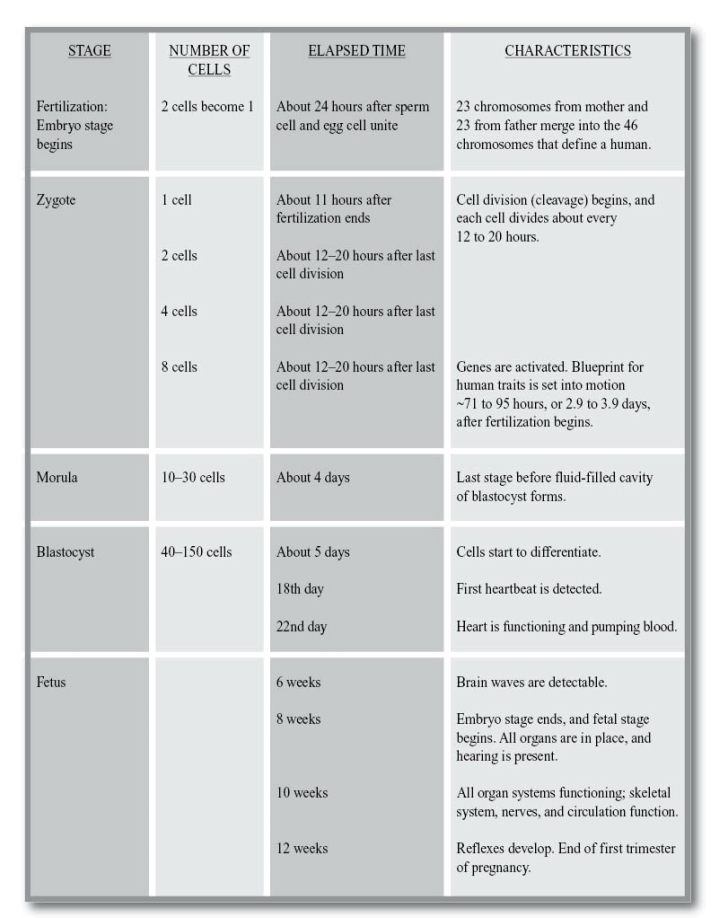 The stages of human life from fertilization through 12 weeks, often called the "first trimester"

In the figure above, I’ve developed a high-level summary of the key characteristics leading up to our birth, and the average stage at which we develop these characteristics under typical conditions in the womb. The purpose of sharing them here is for a scientific point of reference only: to give us something more than an emotional reaction upon which to base our opinions on life and its beginnings; something to reference when we find ourselves without an informed opinion.

During my search to obtain the latest research describing the stages of human life, it became clear that the differences among individuals make it difficult to precisely time what happens in each stage. For this reason, this information is meant as a synthesis of general opinion, and not as a table of absolute timing for events in the womb.